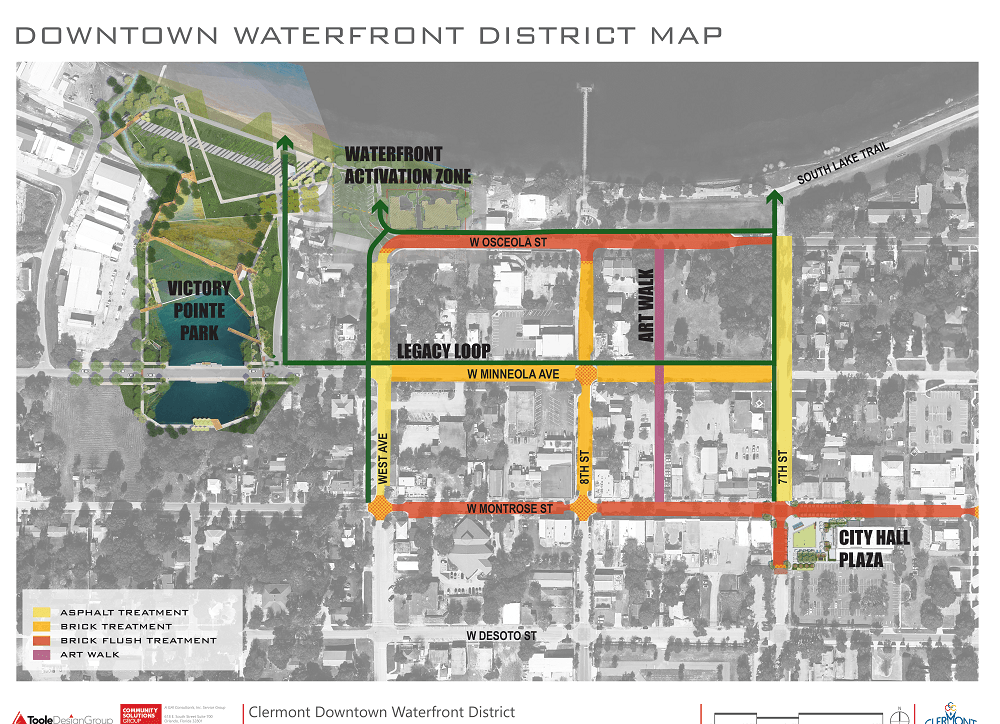 The City of Clermont's award-winning Downtown-Waterfront Master Plan has served as the city's road map for the future of our city since its adoption in 2015. Like any plan, it is meant to be a guide and is intended to adapt to changing circumstances.

There are over 30 projects in the overall Master Plan, including streetscape, trails, parks and infrastructure improvements. The $22-million Master Plan projects are being funded by Lake County's Infrastructure Sales Tax, also known as the Penny Sales Tax; no property tax dollars are being used to fund the Master Plan.

While much of the focus is on the Downtown-Waterfront District, the Master Plan offers insight on how to keep our growing city connected and how to protect the very charms that have drawn hundreds of thousands of people to this internationally recognized city that is one of the nation's top places to live and also a training ground for the world's elite athletes.

We are dedicated to bringing this vision to life and have already made great progress. We are delivering on our promises. 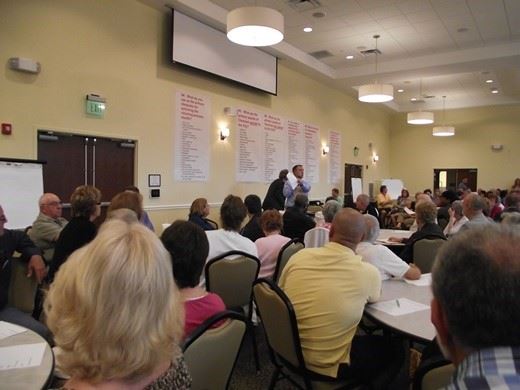 Here's a brief timeline overview of the city's Master Plan:

Location: Downtown, to be determined

Highlights: When the city put together its Master Plan, it identified a parking structure as a project to be considered later. As anticipated, the city's public investment successfully inspired private investment, which has increased the number of visitors downtown and, in turn, the demand for parking. A September 2020 parking study concluded that the city had enough parking downtown to serve its current needs, but additional parking would be needed if city parking leases ended and/or if parking needs continued to increase as downtown attracts more development. In February 2021, consultants completed a downtown parking site evaluation and scored six potential locations for parking structures based on site potential, walkability, surrounding land uses and current demand. As of March 2021, staff is currently evaluating these sites for cost estimates and construction constraints. Next, the city plans to select a preferred site.

Highlights: The next part of the Master Plan strikes at the heart of our Downtown. The proposed improvements include streetscape, landscaping, lighting upgrades and beautification. This $12-million project is being constructed in three phases to allow for continued business operations and traffic flow downtown.

Phase 2 began on January 4, 2021. As with Phase 1 of the city's streetscape construction project, Phase 2 is being constructed in segments. The first two segments, which were completed February 10, went from the intersection of 8th Street and Osceola Street to the intersection of 8th Street and Minneola Avenue. Next up was Minneola Avenue from 7th Street to 8th Street, which was done in half-block segments from east to west starting with March 15 with an early completion in May.

The project covers four city blocks and is approximately 2,000 linear feet of reconstruction, including two intersections within an area of existing businesses, residents and visitors. 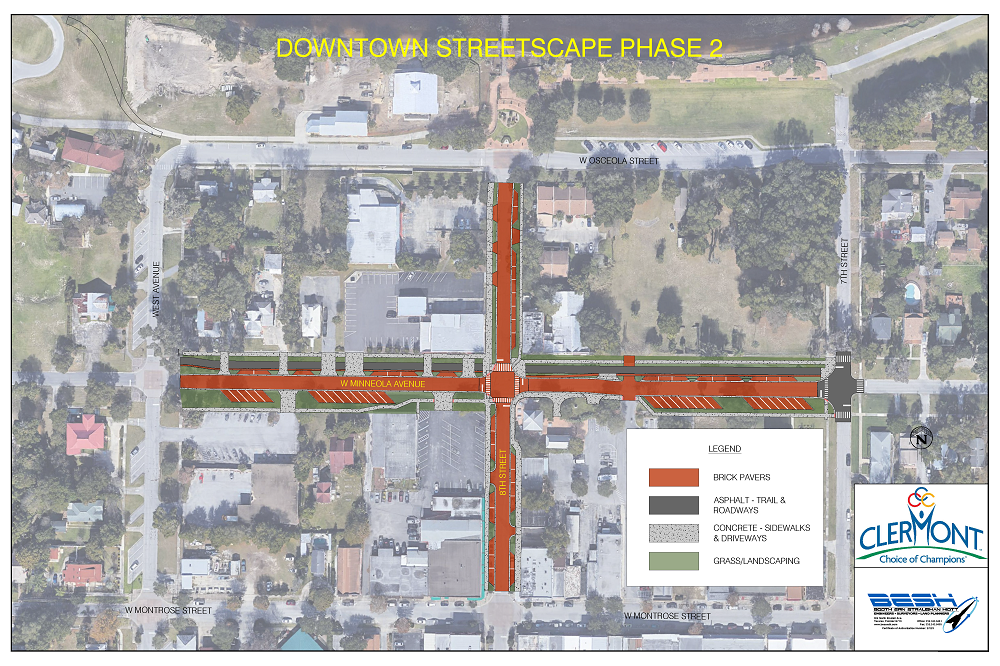 We are working on plans to celebrate "Meet Us in the Middle," our location as the halfway point along the state's Coast-to-Coast Trail, about 100 miles from each coast. After a valuable community feedback meeting, we have gathered residents' ideas and input and are applying them to the design. We envision creating an attractive and lively destination for sports tourist, visitors and event attendees that would highlight the center of the trail. 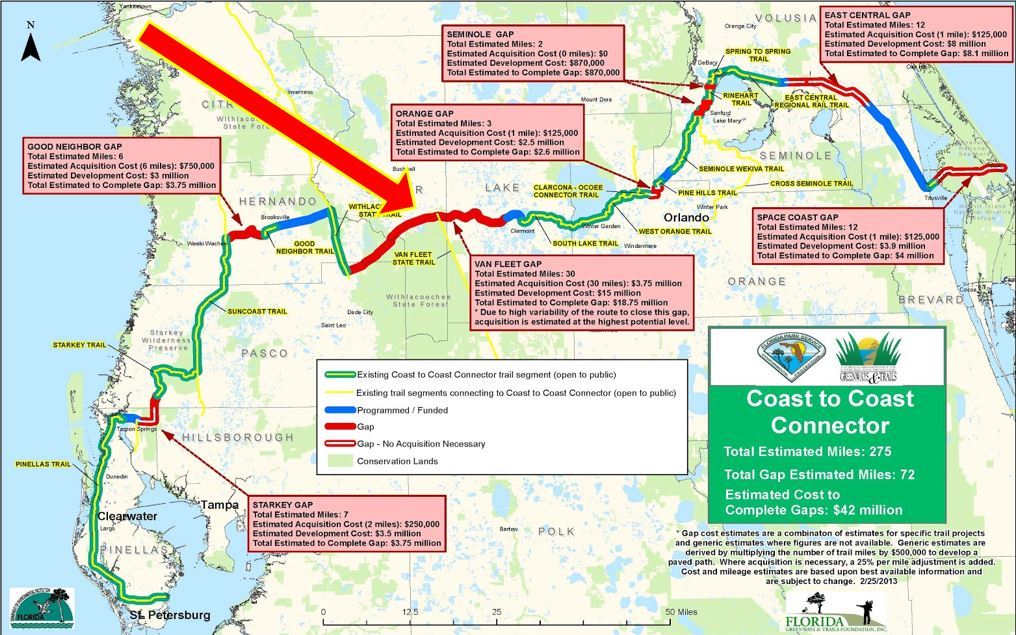 In addition, Legacy Loop Trail and smaller trail projects will encourage South Lake Trail users to come into Downtown. The Legacy Loop Trail is a permanent bypass of the Waterfront from 7th Street to just west of Victory Pointe. This directs traffic into Downtown and provides a bypass of the Victory Pointe event area during large events. Part of the trail goes right in front of Suncreek Brewery and adjoining restaurants.

Phase 3 will cover Montrose Street (West Avenue to Lake Avenue) and City Hall Plaza. We plan to construct it in 2022, once Phase 2 is completed. We are finalizing designs for Phase 3 after Phase 1 is completed. Phase 3 will create a focal point at City Hall Park to anchor downtown visitors, making it a destination and a gathering point in the heart of Downtown Clermont.

Location: From Minneola Avenue to Montrose Street, in the former parking lot just east of the South Lake Animal League (Plans are in discussion about extending the Art Walk further north and south in the future.)

Highlights: The Art Walk broke ground in 2020 and the core, one-block segment was completed by the end of 2020. This new brick pedestrian walkway celebrates local artists with a covered pavilion and an open-air grassy space for vendors to set up tents. The Art Walk encourages the connectivity and flow of visitors between our Waterfront and our Downtown shops, restaurants and breweries. The Art Walk project is a public-private partnership between the City of Clermont and the Art Walk LLC. 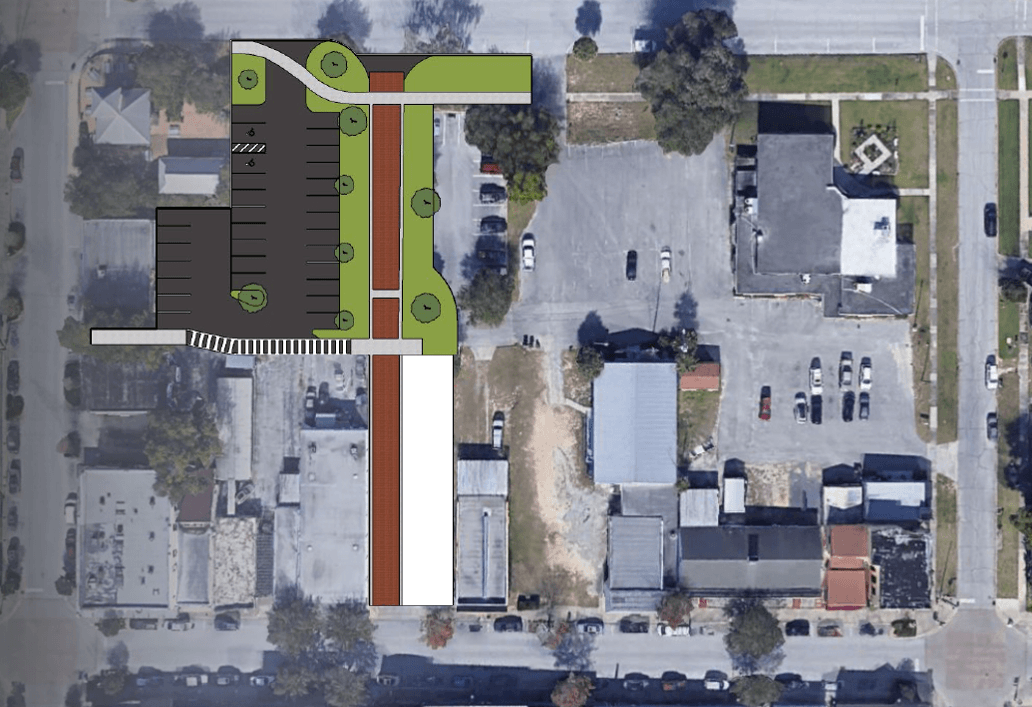 Highlights: The City of Clermont has constructed a larger boat ramp in a new location based on valuable feedback from key community groups. A ribbon cutting was held January 10, 2020; view the event video here. A project bid from Traverse Group for $2.49 million was unanimously approved by our City Council at the May 28, 2019 public meeting. A big win, Lake County Commission approved the city's request for partial funding for $750,000 at their board meeting on May 21, 2019, utilizing the county's tourism development tax. A lot of behind-the-scenes work was done on the boat ramp, including surveys for boundary, topographic, tree, wetland locations, borings and geotechnical aspects; underground utility locations; and an environmental survey.

The former boat ramp between was between Victory Pointe and the Clermont Boat House. The new location shifts motorized watercrafts away from the many non-motorized watercrafts that launch from the Clermont Boat House and Victory Pointe. The new ramp doubled the launch pads from two to four, increased parking from 77 to 102 spots, added 10 mooring slips for peak traffic and has new restrooms. As part of the plan, the South Lake Trail was rerouted around the boat ramp for safety.

There is a cost to use the boat ramp. Visitors pay $5 per day and can pay via credit or debit card at the kiosks located on either side of the boat ramp. City of Clermont residents can purchase an annual pass for $35 from the Utility Billing office; it's located on the first floor of City Hall, 685 W Montrose Street, and is open during normal business hours from 8 am to 5 pm. Monday through Friday. 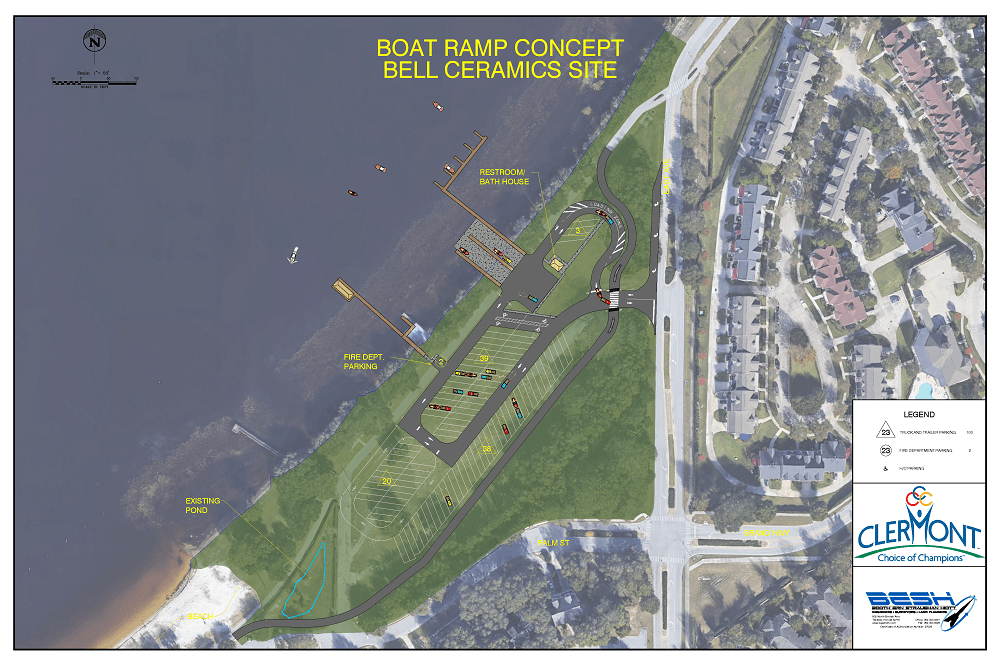 Location: 466 W Minneola Avenue, in Kehlor Park on the east side of downtown, just south of the original building

Highlights: We love our seniors! That's why we built them a bigger, better senior center. Construction started in December 2018, after City Council approved the $484,000 project. A ribbon cutting was held 10 am. November 15. Read the city's news release on the ribbon cutting here.

The existing building served the community well for over 60 years and was repaired many times; it stayed open until the new building was completed. The new building was designed by Powell Studio Architecture to be consistent with the look of other city structures downtown and around the city. Amenities include a multipurpose room, restrooms and storage. Popular Champions for a Lifetime senior programs held at the Clermont Arts and Recreation Center have been expanded to the new Kehlor Recreation Center. 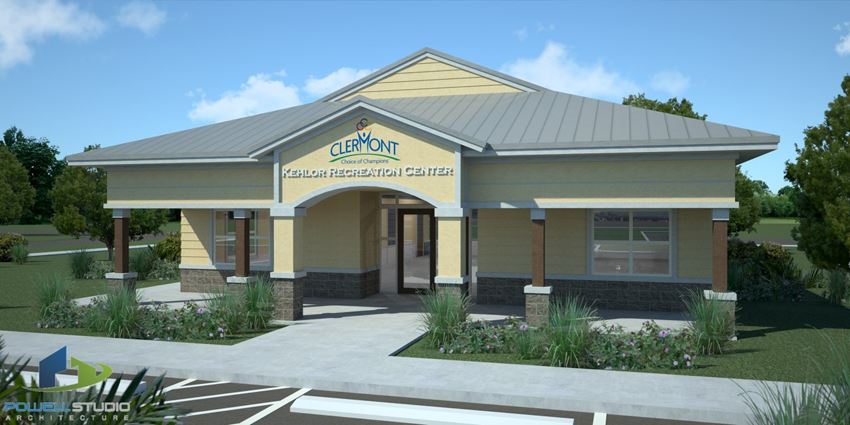 Locations: At Clermont's eastern and western city limits along State Road 50, as well as at the 8th Street entryway into downtown

Highlights: Attractive gateway entry features delineate and demarcate the City of Clermont's downtown, as well as its eastern and western city limit boundaries. In 2018, the city completed the features at the 8th Street entryway into downtown. In 2019, the large towers located on our eastern and western boundaries on State Road 50, one of the most highly trafficked roads in the area, were completed. These structures distinguish Clermont from Groveland to our west and Orange County to our east while reinforcing our theme and brand. The feature at the intersection with Lake Boulevard is on the north side of the road, while the one on 12th Street is on the south side of the road. Standing over 25 feet tall, the towers light up at night and are surrounded by beautiful landscaping and an architectural wall. We're letting everyone know that "Clermont Welcomes You." 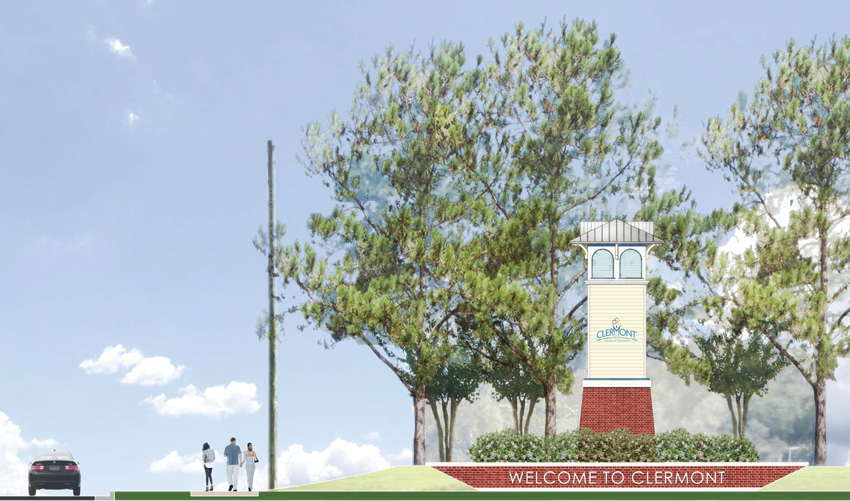 Highlights: In July 2018, the City of Clermont completed its first major project in the Master Plan - Victory Pointe. Not only is it a stormwater filtration system to keep Lake Minneola clean, but it's also an urban passive park and event venue. Already it has encouraged development and redevelopment downtown by allowing businesses to maximize their sites. It's also encouraging foot traffic from the Waterfront to our Downtown shops and restaurants.

The city partnered with five agencies to acquire 11 grants totaling $4.2 million toward the $10.4-million project. 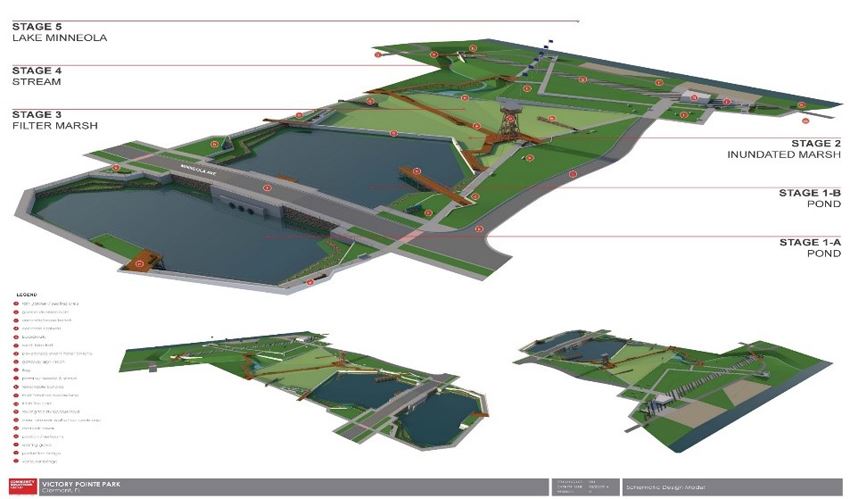 Victor Pointe was featured on the cover of the January 2019 issue of the Florida Water Resources Journal. Read the story on Page 12. 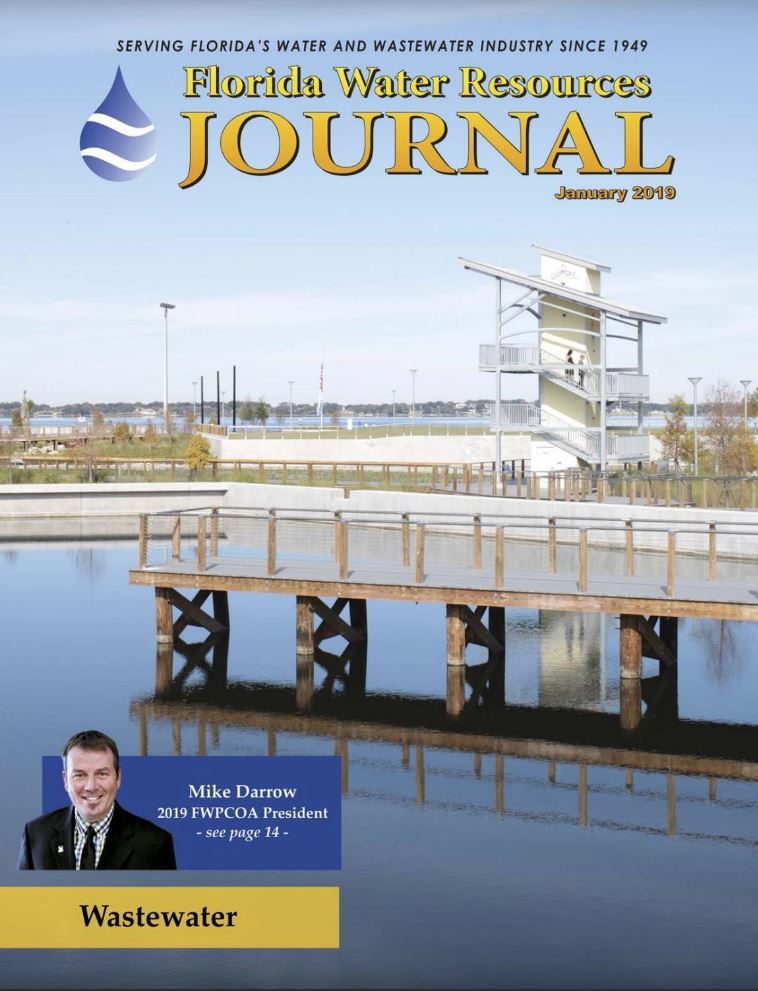